IMMACULATE CONCEPTION CHURCH | ABOUT US

The doctrine of the Immaculate Conception is one of the most misunderstood - or perhaps misinterpreted - teachings of the Church, insofar as many believe it to address the conception of Jesus, rather than the conception of His Mother, the Virgin Mary.

The feast of the Immaculate Conception was established in 1476 by Pope Sixtus IV, but this feast was not declared to be either official doctrine or dogma. Later, the 16th century Council of Trent upheld the same position, which allowed the faithful the flexibility to accept the teaching or not. But on December 8, 1854 - only 155 years ago - Pope Pius IX pronounced the doctrine that the Blessed Virgin Mary "in the first instance of her conception, by a singular privilege and grace granted by God, in view of the merits of Jesus Christ, the Savior of the human race, was preserved exempt from all stain of original sin." This doctrine, as specified in the papal constitution "Ineffabilis Deus", settled the matter officially.

The doctrine of the Immaculate Conception of Mary maintains Mary's immunity from original sin - that original sin was never in her soul from the moment her soul was joined to her physical body.

The subject of the conception of Mary and its proper interpretation has been discussed and debated virtually throughout the entire history of the Church. From as far back as the Desert Fathers, and later by such learned theologians as Origen, Tertullian, Ireneaus, St. Augustine, St, Ambrose, St. Bernard, St. Thomas Aquinas and Duns Scotus, opinions have been expressed and analyzed again and again and again. The Biblical foundation of this doctrine is often thought to be from Luke's Gospel (Lk 1:28), when Gabriel greets Mary with the words "Hail, Mary full of grace . . ." 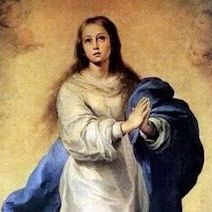